Megan Fox is an American Actress. In this post, we will talk about all the tattoos that she has. She has more than 6 tattoos on her body. But some of them now are gone.

So now we will show you all the tattoos with pictures. Also, tell you the meaning of each tattoo.

Brain Tattoo on Her Hip Bone

This tattoo is called a couple matching tattoo. Megan got this tattoo when she was 18 years and started dating Brian Austin Green. That time Brian was 30 years. They got married on June 24, 2010.

So their relationship is successful and now they blessed with three sons, Noah Shannon Green he was born in 2012. Bodhi Ransom Green born in 2014. And journey River Grenn born 2016.

Megan Fox also got this tattoo when she was 18 years old. She had this tattoo on her right forearm. Megan got this tattoo because she claims that when she was a kid have cried every time when she hears Marilyn’s voice. but as Megan grew older, She had changed her mind and removed the tattoo from her forearm. Because she doesn’t want to live with such negative implications. She said:

“I got it when I was 18,” she told Access Hollywood. “I just feel like her life was surrounded and shrouded in so much mystery and tragedy.

She was troubled, and there’s negativity with her life and with her death. And I just feel like there are better things to have inked on your body than someone who struggled so much. So in getting older, I just decided that it was something that I wanted to get rid of.”

She began the process of laser tattoo removal in 2011. The removal is far more painful than getting the tattoo. “It hurts really bad. It’s really painful.

Getting them is not that bad, obviously, because I have so many,” she told Jay Leno. “It’s traumatic and it’s incredibly painful. They can’t numb it enough to make the pain go away.”

Quote Tattoo on Her Right Side

This quote is written by Nietzsche and it is like this: “And those who were seen dancing were thought to be insane by those who could not hear the music.”

This is a kind of motivation for Megan and the meaning of this line is “This is a statement to overcome fear and live your life without any judgment because your actions won’t always make sense to people who don’t understand the circumstances..”

Quotes Tattoo on her Right Back Side

Megan has a quote Tattoo on her backside and write like this “We will all laugh at Gilded Butterflies” It comes from Shakespeare’s play King Lear. But Megan changes the wording of the quote with her real personality.

Megan Fox has a tattoo on the wrist which is the shape of Yin Yang. She has this tattoo on her left wrist. Yin Yang is a Chinese spiritual symbol that symbolizes the balance of both good and bad.

The meaning of this tattoo is like this the crescent moon with the star represents wisdom, positivity, protection, divine powers, and blessings. 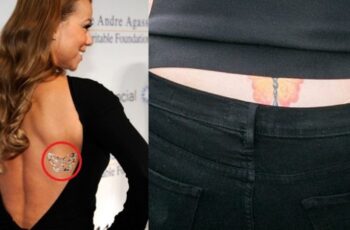